We have just hit a major milestone - Mondoo’s 6.0 release! This version includes many changes we’re eager to share with you:

Most of these changes have been available hidden behind feature flags and CLI options for a while now. This release changes the default experience to make them available to everyone.

Is it difficult to upgrade?

Not at all! We have kept most things backwards-compatible with v5. In most cases you should only see a few deprecation warnings asking you to use new CLI options. The few breaking changes are outlined below.

All deprecations will be supported throughout the lifetime of Mondoo v6. We will remove them when we release Mondoo v7.

Problem: Mondoo can scan many different targets, from your local machine, to remote machines via SSH or WinRM, to cloud systems like AWS or Azure, and even arbitrary APIs. These are specified via the --connection or -t option in the CLI. Unfortunately, it was difficult to use this option effectively, partly due to the wide range of targets and parameters that were supported.

Solution: We are providing a new way to target assets with this release. The scan command has changed from:

You can find more information on every provider with the -h or --help option. For example:

Here are a few more examples of mondoo scan with different providers:

Problem: The default CLI reports used a lot of screen space to convey their findings. They also printed from top to bottom, with a summary and a lot of information below, which forced us to default to pagination for these reports to avoid scrolling. These reports are helpful for security audits, but they didn’t help most other CLI users.

Solution: We have designed a new report whose primary audience is developers and operations experts. This means that we now print a list of controls and data queries first, then list vulnerabilities, and then finish with a short summary. We deactivated the pagination. The default report is also much more compact:

To get more information about individual controls, use the full formatter:

Here is an example of compact (left) versus full (right) output side-by-side for the scan scan: 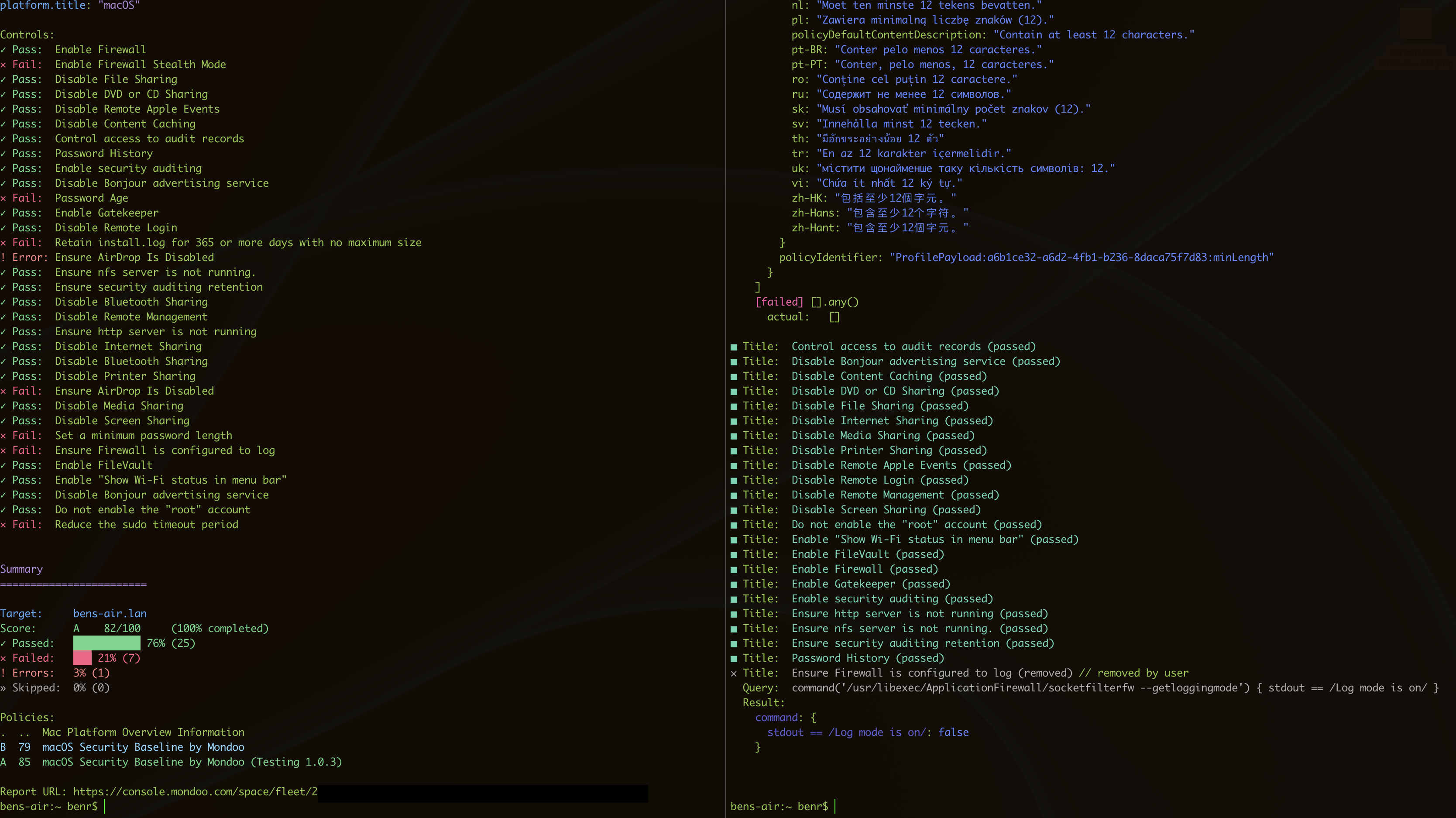 You can access the auditor- and security-centric report via -o report. This was the default output before v6.

Problem: Whenever Mondoo scans ran in CI/CD pipes, unless they had perfect scores (an A+ with a score of 100), they finished with a non-zero exit code. This caused the pipeline to fail, even with only minor issues.

We had previously introduced the --exit-0-on-success option to address this use case. It changed the behavior to always finish with an exit code of 0 whenever the scan was successful—even if it produced an F.

While this helped remedy the original problem with failing pipeline runs, it didn’t help users who wanted to fail their tests if certain conditions were met. This was technically possible, by knowing all the available exit codes mondoo scan generated, but was impractical and hard to use.

Solution: Mondoo scans now always return an exit code of 0 by default when a scan is successful. Both As and Fs show a successful run.

With the previously introduced --score-threshold you can change this behavior to fail the execution (exit code 1) whenever the score falls too low. For example, this command fails all scans that result in an F (if their score is below 10): 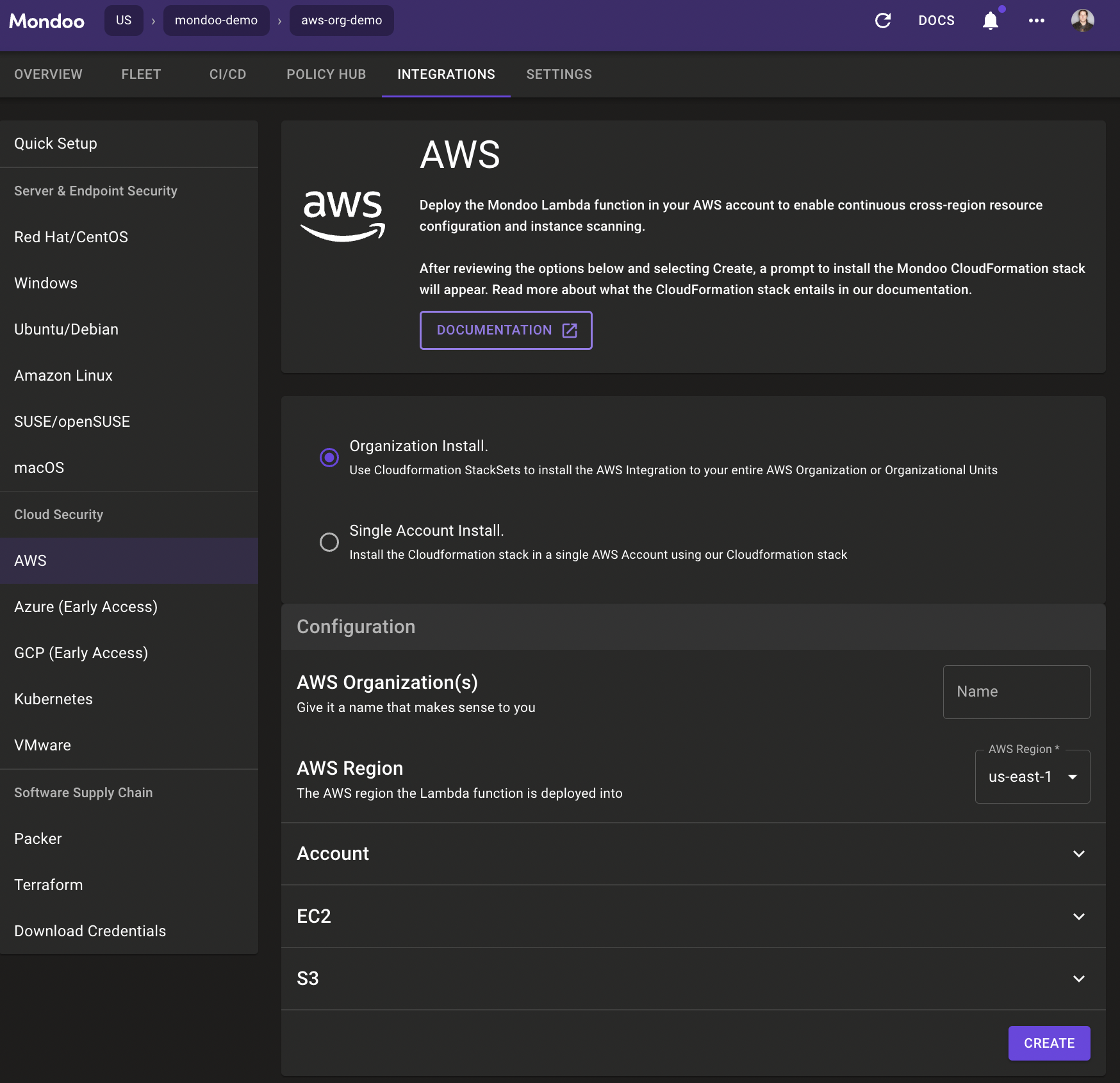 Problem: It was impossible to use variables across blocks in MQL, which made a lot of queries more difficult to write. We have wanted to fix this issue for a while, which required a major change in MQL’s execution engine.

Solution: Variables can now be used across blocks like you would in many other programming languages. Here is a simple example:

In this example, we define a new variable x and set its value to the region of the table. We can then use the variable to access the limits entry that matches this region. Previously this was not possible, since both fields had the same name (region) and variables weren’t accessible across blocks.

We now automatically detect the client running in CI/CD environments. Once detected, we collect more contextual information about the run, like the repository, PR/MR number, and git reference. This allows CI/CD runs to automatically show up in the CI/CD tab in the UI, where you can explore more details.

Today, we support this feature for GitHub, GitLab, and Kubernetes out of the box. We are expanding to other systems soon, so stay tuned!